If it seems like military topics pop up here a lot - get used to it.   As mentioned in my Guard Duty post some time ago, I grew up in a house with re-enactors and was weaned on military history!

If it seems like military topics pop up here a lot - get used to it.   As mentioned in my Guard Duty post some time ago, I grew up in a house with re-enactors and was weaned on military history!   In that vein, I thought it would be interesting to showcase a few pieces of wartime artwork we inherited from Laura's grandfather.   These works were created during John Silvasi Sr.'s time in the U.S. Army during World War II. First off is a bit of wood carving, pictured below are two women carved out of U.S. Army tent pegs along with an un-carved tent peg for comparison.  When John gave these to Laura and I he told us they were made in Anzio, Italy during World War II.   During a break from the front lines he saw another soldier carving tent pegs and decided he could do a better job... take that G.I. Joe! 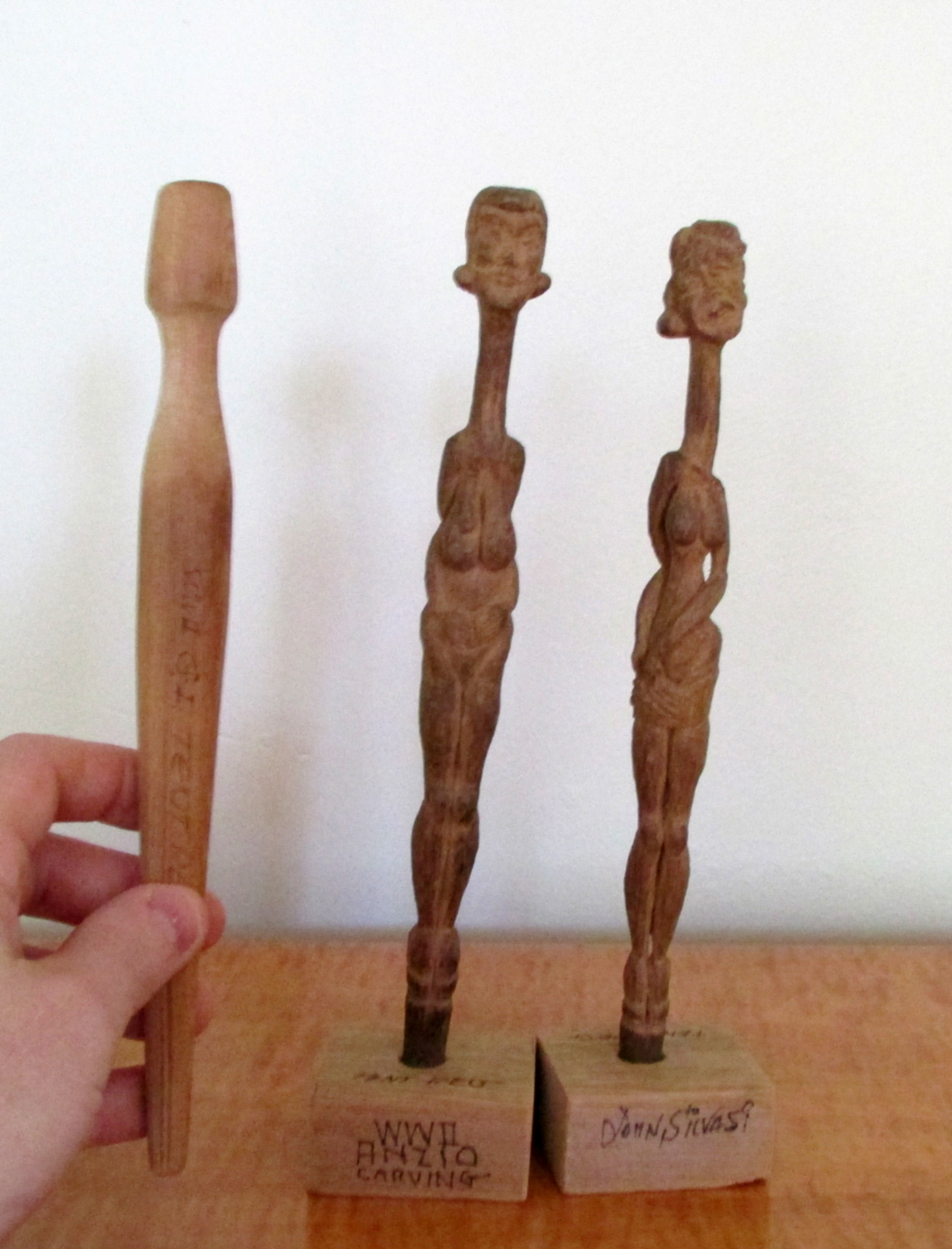 The detail was somewhat hard to capture in these photos, but both women have great expressions.   The figure below is fully nude, spare her high heels of course, with her hands placed on her hips looking oddly smug about her situation in life as a nude tent peg: 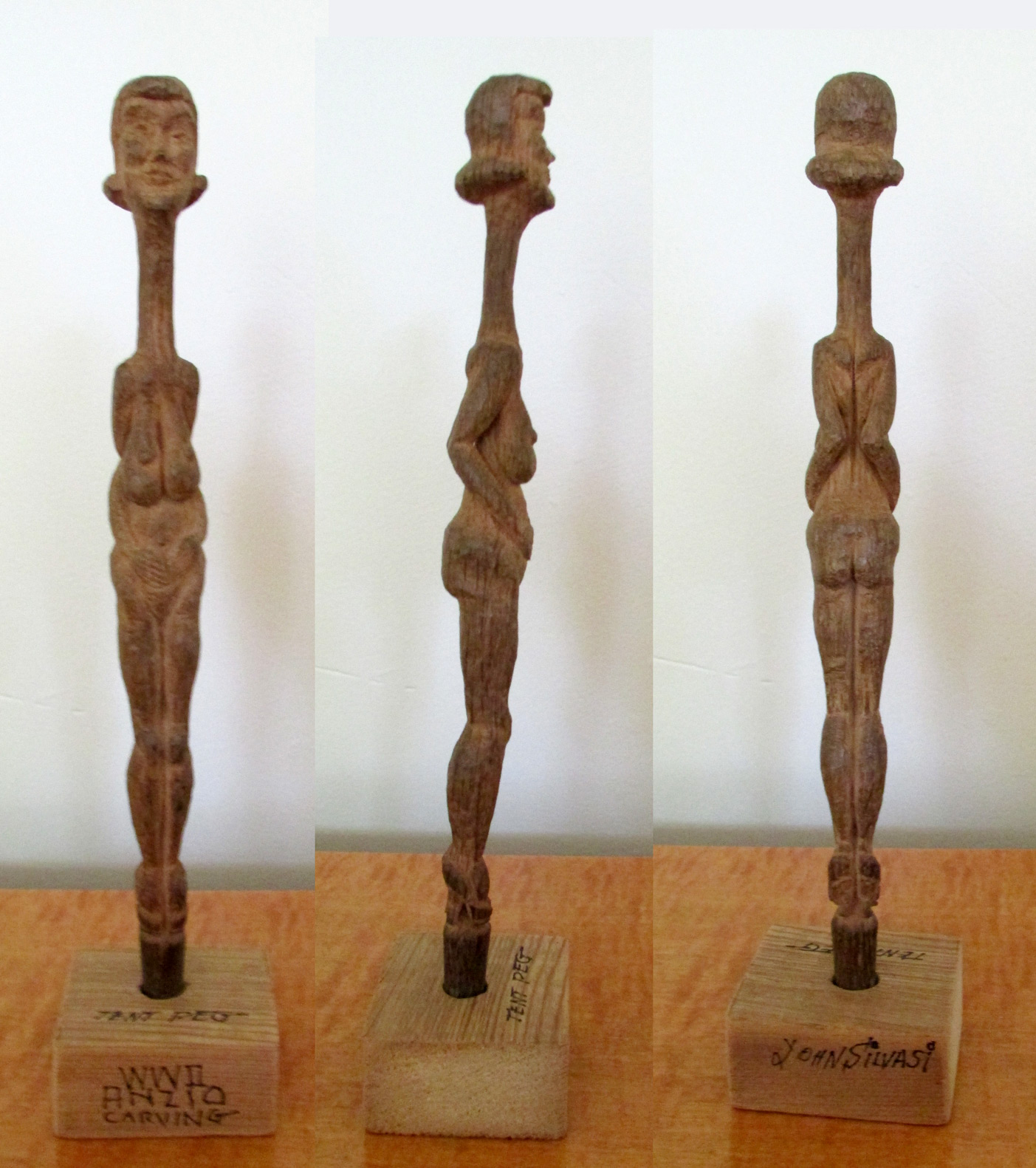 This next one is by far my favorite because it is a more complex composition, with the figure twisting, attempting to keep her garment from falling.   Her look is more extreme too, almost like she's distraught about disrobing in front of the viewer.   Also, the arms leaving a void between the elbows and the body must have been extremely tricky to carve without breaking the tent peg! 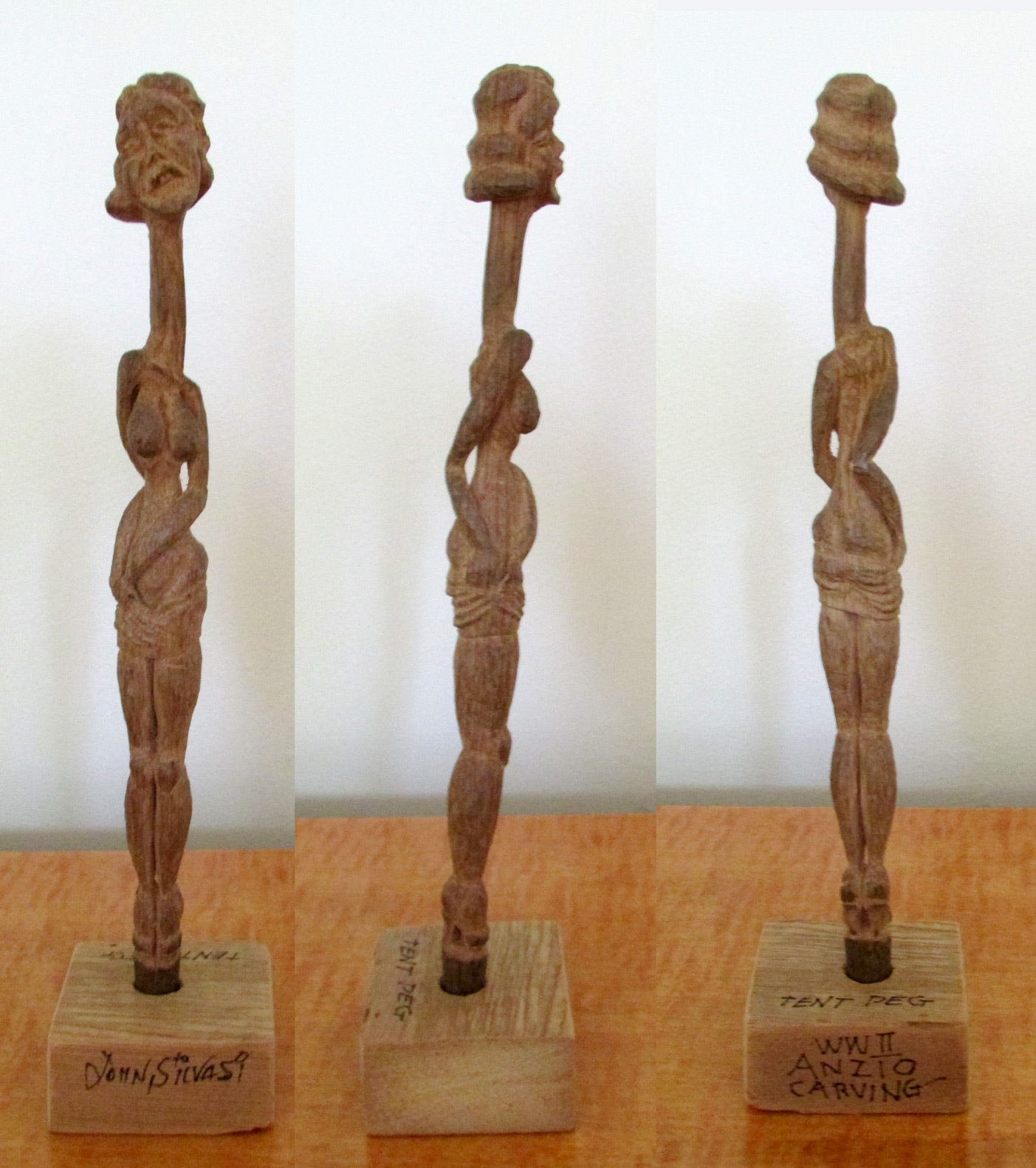 This next piece is really special, it is a water color Christmas card John painting for the U.S. Army 60th Infantry Regiment while in Germany during World War II.   When we inherited this piece it had a bit of mold on it and was a little worse for wear, but luckily we were able to have it restored and reframed and now it hangs with pride in our house.

I really like how this water color captures what I think of as a classic old German town, complete with Tudor architecture and a clock tower.  It almost feels like you are there on a very cold and clear night!  Here is a detail of the soldier in the lower right corner: 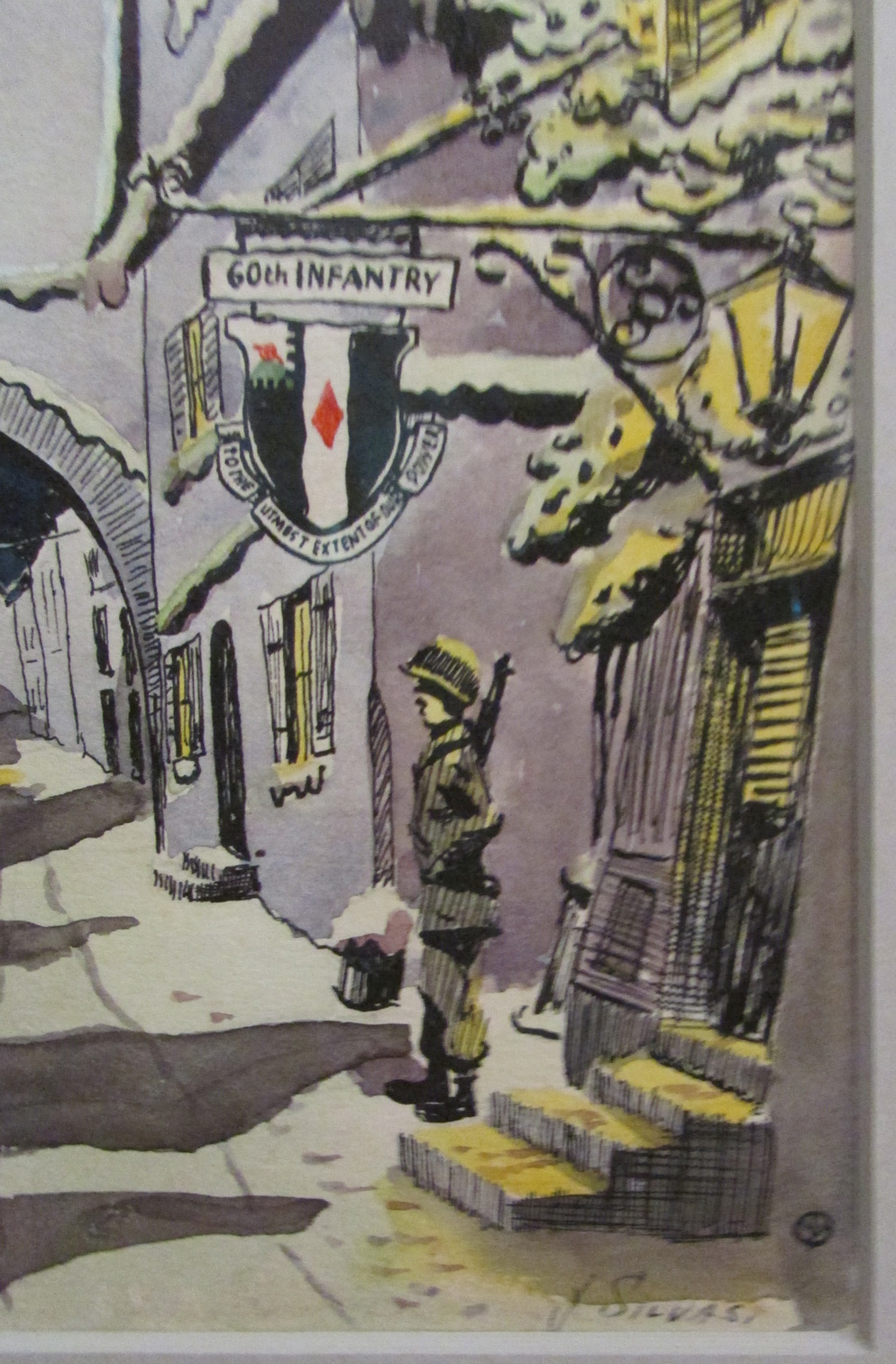 This last work is a very interesting addition to the World War II artwork showcased here: it is a portrait of John Silvasi Sr. done by a German artist, T. Braun, during the war.   The work is oil on board and about 2 feet tall: 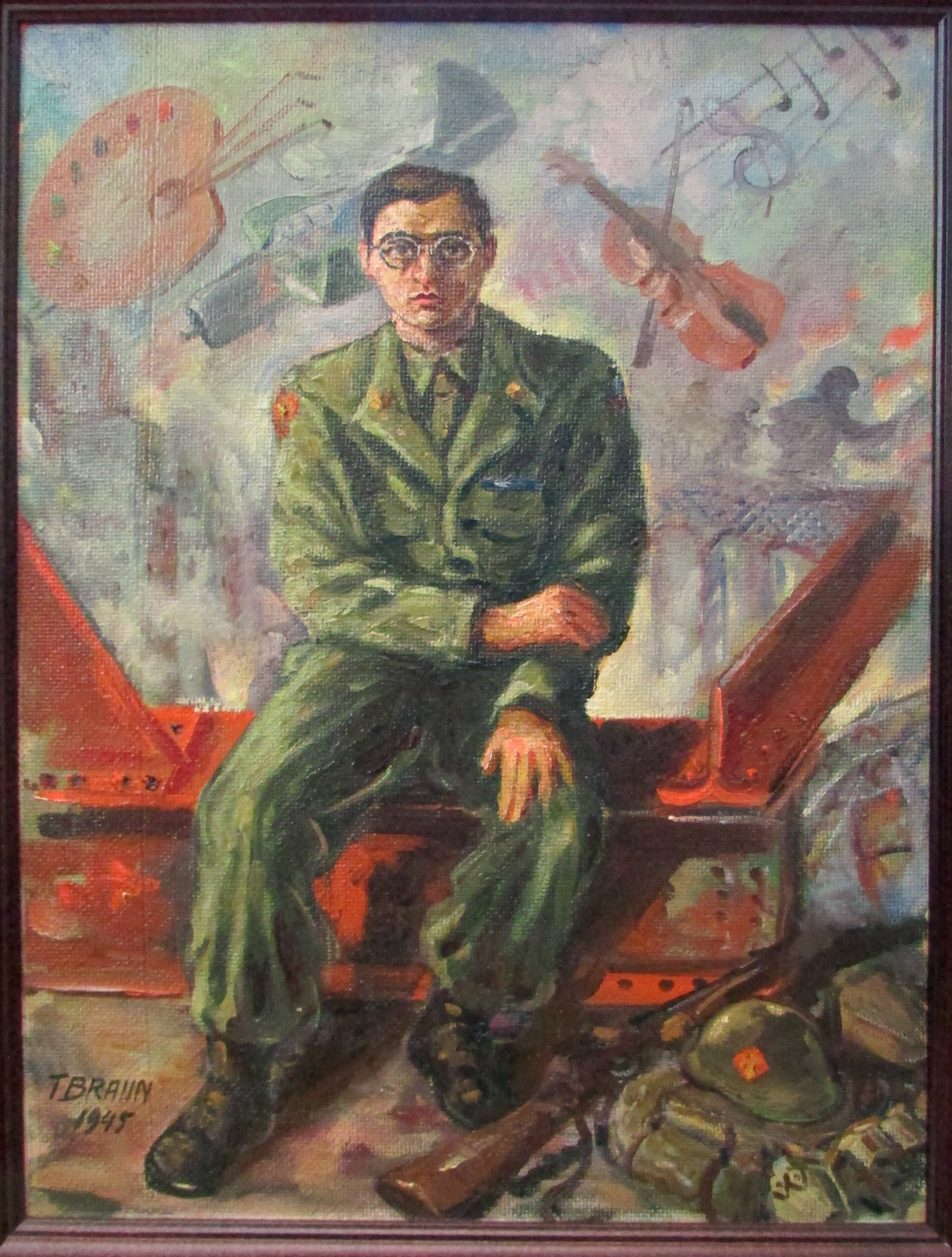 John told Laura and I that he met German artists and even spent time painting with them during the war.  These weren't Nazi artists, but rather German civilians who were sympathetic to the cause of The Allied Powers.  Here is a bit more detail of the top portion of the painting: 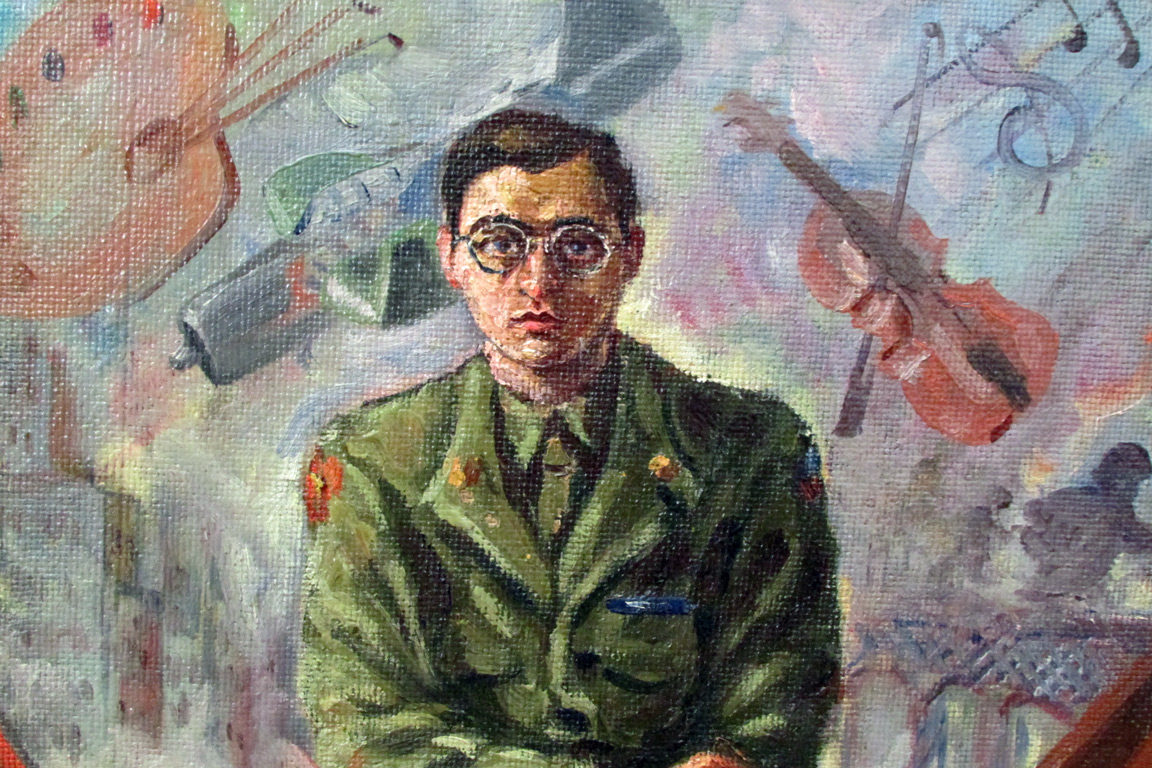 It appears T. Braun wanted to capture aspects of John's life and personality such as his love of art and music.   In the background are an artists palette, a violin with musical notes, and to the left is a city (possibly Philadelphia), to the right are silhouettes of soldiers, and finally he is seated on I-Beams which may represent American industry?

That's it for this awesome collection of artwork produced during World War II.   I'll get back to my more standardized/ridiculous computer graphics related posts in the upcoming weeks, I just wanted to memorialize these works in blog format while the pictures were still fresh on my camera!As he was the subject of this entire post, a bit more on John Silvasi Sr.:Born in Freeland, PA, John attended the Mining and Mechanical Institute for high school, later graduating from the University of Pennsylvania.  He served in the Army during World War II and saw combat in Italy and Germany. He worked for many years as a test chemist at DuPont’s Marshall Lab in Philadelphia. He was also a member of the board of directors at the Christian C. Sanderson Museum in Chadds Ford.John Silvasi Sr. passed away Tuesday, November 13, 2012 - he was 97 years old and was drawing and making art up until the very end!